The set up: Youâve been asked to find the relationship between n variables. You automatically think REGRESSION! Of course youâre right. and if youâre like me, you think Multivariate Linear Regression should do the trick. This is where the hitch is. Your dependent variable is a count (0,1,2,3,\(\dots\\))! Surely this violates some sort of Ordinary Least Squares assumption, right? What now?

The solution: Count data regression is as simple as linear regression, it just requires a different model. The obvious model from statistics is the Poisson with mean \(\lambda\). Why is this an obvious model? Letâs see how the Poisson distribution fits over some sample count data: 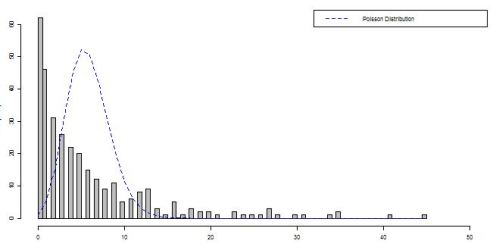 You can see the distribution fits (maybe not the best fit, but what do you expect with the simplest model?) and we can move on to talk about how the model is structured.

The Model: The Poisson regression model takes a general form:

If you think about interpreting the coefficients this way: âWhat does a one unit change in the jth regressor do to the mean?â, then some calculus and algebra are necessary:

This tells us that with every one unit change in the jth regressor, there is a change in the mean by the amount \(\beta_j E[y_i\vert x_i]\). For reference, the linear modelâs mean would simply change by \(\beta_j\).

Alternative Count Models: The Poisson model, while simple to use and easy to remember does have its draw backs. Namely, it restricts the variance to equal the mean, called equidispersion. Of course, this assumption doesnât necessarily hold in your data. The data is called overdispersed if the variance exceeds the mean and underdispersed if the variance is less than the mean. Unless the count data is equidispersed, the Poisson model leads to innacurate results.

If your data is underdispersed, a common solution is to use a Hurdle model. This model treats the process for zeros differently than that for non-zero counts, allowing for a closer fit on zero-inflated data.

Also, be on the look out for an example of working with count data!