As part of the course Stat 585X I am taking this semester, I will be posting a series of responses to assigned course readings. Mostly these will be my rambling thoughts as I skim papers.

This week we are reading documentation on the dplyr package by Hadley Wickham from January 2014. These two vignettes lay out the introduction to the new package dplyr and how to use dplyr on data stored in a database.

dplyr introduces five basic âverbsâ that we can use to work with a data frame:

Using these five verbs and a grouping function, aptly named group_by(), we can quickly and easily do any manipulations of a data frame that we may need.

I am struck by the quickly closing gap between my R knowledge and my SQL knowledge. dplyr strikes me as an R-interpreted SQL query, which makes a whole lot of sense. When we want to pull data, it seems like a no-brainer to utilize ideas that have been working since the 1970âs. Kudos to Hadley for bridging this divide.

The other novel thing introduced in dplyr is an operator to chain verbs. This operator, %.%, allows you to apply multiple verbs to a dataset in a certain order through the syntax x %.% f(y) turns into f(x, y). The chaining of verbs allows us to construct âsentencesâ, if you will, that can act on a data frame to produce the desired results.

Anyone who has ever had to deal with a truly large dataset knows that the in-memory storage of data in R can be quite a pain. the dplyr package supports external storage of data in an open source database (sqlite, mysql and postgresql), or Googleâs bigquery.

What Hadley calls lazy, I call a stroke of genius. dplyr wonât pull the entire dataset until you tell it to do so, through a collect() command. This way you can tinker with your query, seeing the top 10 rows of your results until youâre happy. At this point you can say collect() and the full query will be run, pulling back the entire dataset. This sort of code-and-check method that is used to often saves us the hassle of running a query for half an hour, only to find out we forgot a column. Yay! 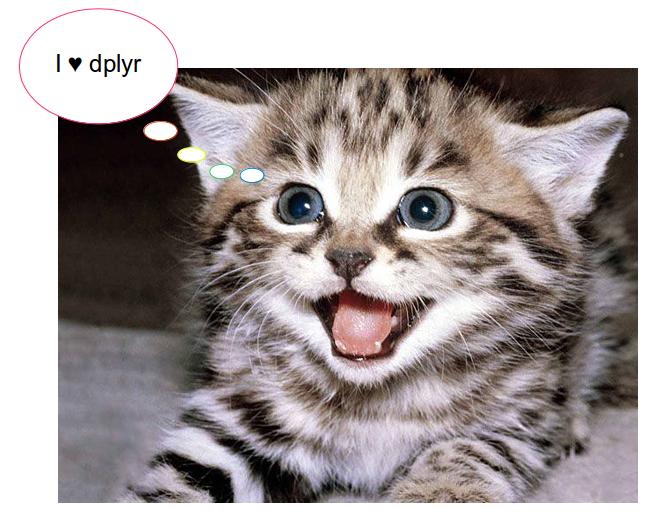